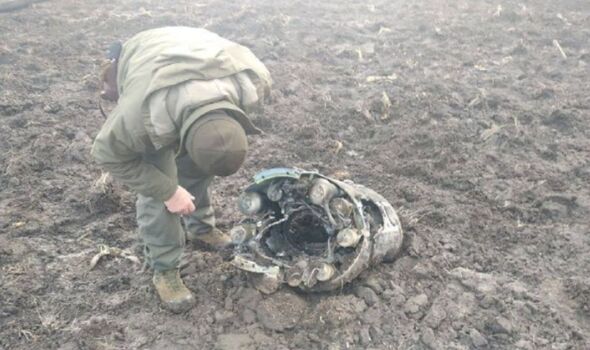 A Ukrainian missile has been downed over Belarus, according to a statement from the Defence Ministry published by state-operated BelTA news agency. The S-300 missile was reportedly intercepted over the Brest Oblast, a region of Belarus which shares borders with both Poland and Ukraine. The news comes after Ukraine suffered a renewed campaign of fierce Russian missile strikes, which saw over 120 attacks on cities across the country, including the capital of Kyiv.

The Belarusian Ministry of Defence released a brief statement which confirmed the missile was Ukrainian and had been shot down at 10 o’clock on Thursday morning.

Incidentally, the missile was intercepted during roughly the same period as Ukraine was conducting increased air defence operations following a flood of fresh Russian shelling.

BelTA reported: “Pieces of the missile was found in a crop field in the vicinity of the village of Gorbakha, Ivanovo District, Brest Oblast.”

The report continued: “An examination revealed that the pieces had been part of an S-300 air defence guided missile fired from Ukraine’s territory.”

The S-300 guided missile is a form of surface-to-air system originally developed by the Soviet Union and used by both Russia and Ukraine.

Speaking during a media briefing in Ukraine, Reznikov said: “S-300 missiles are functioning very effectively. The point is that they were not produced in Ukraine, meaning that we have no means of producing S-300 missiles, so we are using existing stocks.”

“We are currently negotiating with the defence ministers of all countries that have S-300s in service regarding the possibility of replenishing this stock of missiles from their warehouses and arsenals.”

Oleg Konovalov, the military commissar of the Brest Oblast, released a statement following news of the stray missile.

He drastically played down the incident and suggested residents had “absolutely nothing to worry about”. He added: “Unfortunately these things happen.”

Following an investigation, NATO concluded the missile was “most likely” a Ukrainian device that had accidentally landed in Poland and was intended for defensive use against increased Russian shelling.

Belarusian authorities have not reported any casualties following the incident.

BelTA noted: “A team of specialists of the Investigative Committee and the Defence Ministry is working at the scene”.

Pictures of the reported missile debris have been released on Telegram and were shared by the state-run Belarusian news agency.

The missile appeared to have landed in a rural area, with no clear evidence of damaged infrastructure visible in the images.