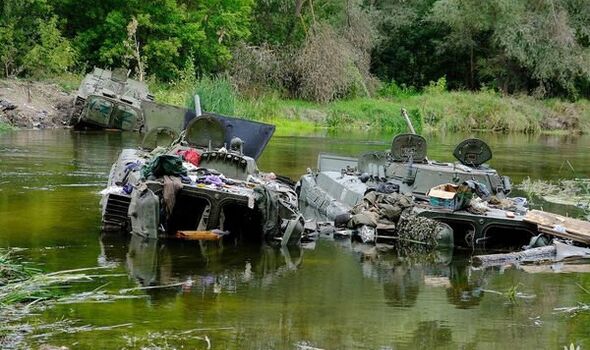 Troops have liberated scores of villages, towns and cities and entered the strategically vital Izyum and Kupyansk – to seize the initiative in the war.

The remarkable advance, if confirmed, means Kyiv’s forces have tripled their stated gains in little over 48 hours.

Kyiv’s forces attacked numerous points along the front line, including in Luhansk, in a devastating lightning assault.

Jubilant civilians left their homes to embrace the soldiers, many battling tears and troops tore down Russian propaganda and raised the Ukrainian flag once more.

Russia’s Defence Ministry claimed it was withdrawing troops from Izyum, which acts as Moscow’s base in northern Donbas, and Kupyansk, which has many of the major railway lines to the frontline, to focus on the protection of the Donbas.

General Sir Richard Barrons, a former British army commander, said: “The Ukrainians saw an opportunity and it did a very good job to seize it.

“It’s good news they are on the offensive, showing the Russians can be beaten.

Professor Michael Clarke, former Director of the Royal United Services Institute said: “We are now seeing the Russians being defeated, not just outmanoeuvred,”

He views the advance as “an early turning point”.

The American think tank Institute for the Study of War (ISW) revealed Ukraine gained as much land in the past five days as the Kremlin seized during a brutal artillery assault on cities across Ukraine between April and September.

Ukrainian troops may also now be able to get supplies to cities such as Kramatorsk and Sloviansk which have been shelled relentlessly by the Kremlin’s killers.

And it is widely expected that they will use these newly recaptured areas to launch further assaults on Russian troops already in disarray.

The ISW said: “Russian forces are not conducting a controlled withdrawal and are hurriedly fleeing southeastern Kharkiv Oblast to escape encirclement around Izyum. Russian forces have ­previously weakened the northern Donbas axis by redeploying units from this area to Southern Ukraine, complicating efforts to slow the Ukrainian advance or at minimum deploy a covering force for the retreat.

“Ukrainian forces have penetrated Russian lines to a depth of up to 70 km and captured over 3,000 square km of territory in the past five days – more territory than Russian forces have captured in all their operations since April.”

The head of the Russia-installed administration in the Kharkiv region recommended its people evacuate to Russia “to save lives”.

The governor of the Belgorod border region in Russia, Vyacheslav Gladkov, said “thousands” of people had crossed into the country.

Mr Gladkov said on Saturday that mobile catering, heating, and medical assistance would be available to people entering Russia.

Natalia, 50, said of the liberation of her village Novovoznesenske: “When our armed forces arrived, we were in the basement.”

“They asked, in Ukrainian, ‘is anyone alive?’ and I realised they were ours. They were so handsome, so beautiful, especially compared to the fascist Russian forces.

“I didn’t know what to do with them – if I should hug them or hold their hands? I touched them and I was very happy.”

The speed of the retreat drew derision. Andriy Yermak – chief of staff for President Volodymyr Zelensky tweeted: “The Russian army is rushing to get famous as the fastest army in the world. Keep running.” In Kherson, Ukrainian rebels are amassing a network of activists inside the city, to gather intelligence on military positions and pass it on to Ukrainian forces.

A member of the resistance said they are being hunted by Russian troops. He added: “The Russians are finding places where photos are being taken.”

“There are mass searches of flats close to strategic vantage points. “

“There have been two cases in the past week when people were taken from the streets.”

But he says the news from the frontline is bringing hope.

He added: “People are now very encouraged by the advance around Kharkiv. Many hope ‘we will be next’.”

The pace of the advance left the Kremlin’s media reeling.

Russian television anchor Olga Skabeyeva said: “The news is troubling” as she blamed the advance on Western support to Ukraine.

She added: “For its advance in the Kharkiv front, Ukrainian forces used the units that have been trained in Britain.”