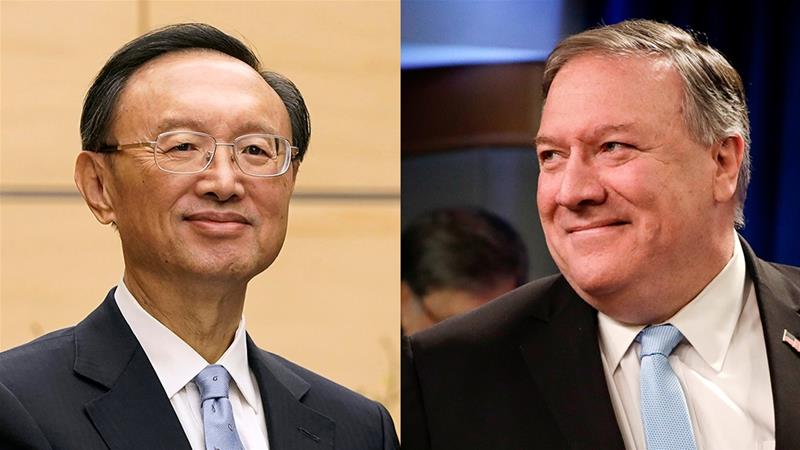 United States Secretary of State Mike Pompeo and his Chinese counterpart Yang Jiechi held talks on Wednesday for nearly nine hours on a range of contentious issues that have soured the relationship between the two countries, including the coronavirus pandemic, Taiwan, Hong Kong and Xinjiang.

The meeting at a Hawaii military base was their first face-to-face encounter since August.

Yang said cooperation between the two countries was “the only correct choice”, according to the Chinese foreign ministry, and promised to work with the US “to develop a relationship of no conflict, no confrontation, mutual respect and win-win cooperation”.

For his part, Pompeo stressed “the need for fully-reciprocal dealings between the two nations across commercial, security and diplomatic interactions,” a spokeswoman for the US State Department said in a brief statement.

“He also stressed the need for full transparency and information sharing to combat the ongoing COVID-19 pandemic and prevent future outbreaks,” the statement said.

Wednesday’s meeting in Honolulu started shortly after 9am (19:00 GMT) and concluded at 3:50pm (01:50 GMT on Thursday). Pompeo has been forceful in his criticism of Beijing and it was his first known contact with Yang since they discussed the coronavirus pandemic by phone on April 15.

As the meeting got under way, US President Donald Trump signed legislation calling for sanctions against those responsible for the repression of Uighur Muslims in Xinjiang. That included financial sanctions and visa bans on officials deemed guilty in the detention of more than one million Muslims in camps that China describes as vocational training centres aimed at tackling extremism in the region.

Separately, foreign ministers of the G7 countries, including Pompeo, issued a statement calling on China not to follow through with national security legislation for Hong Kong that critics call an assault on the territory’s democratic freedoms.

Trump has initiated a process to withdraw the US’s special trade status for Hong Kong to punish China for curbing freedoms in the semi-autonomous territory, but has stopped short of immediately ending the privileges.

On Xinjiang, Yang told Pompeo to respect China’s “anti-terrorism” measures in the far western region, saying they had “greatly reversed the security situation” there. Yang also expressed “strong dissatisfaction” with the US law, according to the foreign ministry statement. Earlier in the day, the ministry had threatened countermeasures against the Xinjiang law.

Details of the law are yet to be drafted by the Standing Committee of the National People’s Congress, which began meeting in Beijing on Thursday. State media says the legislation will cover four main areas – “separatist” activity, subversion, terrorism and collusion with foreign forces.

The law will also allow mainland security agencies to set up operations in the territory.

China’s foreign ministry also said Yang reiterated opposition to US intervention in Taiwan, a self-governing island and US ally that China claims as its own. Yang called Taiwan “an inalienable part of China” and told Washington to handle the issue “carefully and properly”.

Experts say US-China relations have reached their lowest point in years, and in mid-May Trump, who has pursued a deal to end a damaging trade war he launched with China, went so far as to suggest he could cut ties with Beijing.

While Trump and his administration have stepped up rhetoric against China in the run-up to the US presidential election in November, his former national security adviser, John Bolton, said on Wednesday the president sought Chinese President Xi Jinping’s help to win re-election during a closed-door June 2019 meeting.

Bolton’s accusations are part of a book that the US government has taken legal action to block, arguing it contains classified information and would compromise national security.

In the book, Bolton writes that Trump appealed for Xi’s help in getting a second term during a G20 leaders’ dinner in Osaka, Japan, and encouraged the Chinese leader to build camps for the Uighurs in Xinjiang.

Trump hit back at Bolton, calling him “a liar” in an interview with the Wall Street Journal. He told Fox News in a separate interview that Bolton had broken the law by including highly classified material in the book.

There was no immediate comment from Beijing on Bolton’s allegations.