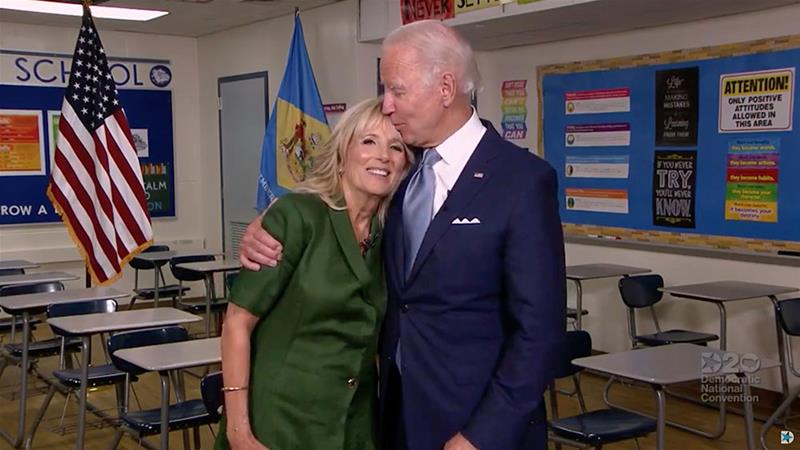 The Democrats in the United States have formally nominated Joe Biden as their presidential candidate, designating the veteran leader as their challenger to President Donald Trump in the November election.

In a virtual roll call vote on Tuesday, due to the coronavirus pandemic, all 50 US states and seven territories announced their tallies endorsing Biden.

“Well, thank you very, very much, from the bottom of my heart,” a beaming Biden said in a live video link as he celebrated the nomination.

“It means the world to me and my family,” he added, reminding viewers he will deliver a formal acceptance speech on Thursday at the conclusion of the four-day Democratic National Convention.

Biden’s nomination was a formality as he had already won the majority of the more than 3,900 delegates back in June.

After Biden formally became a nominee, his wife, Jill Biden, addressed the nation for the first time as the prospective first lady.

Jill, who holds a doctorate in education, gave impassioned remarks about the closure of schools across the US and the loss of lives due to the pandemic.

She recounted her life with Joe in the aftermath of the death of his first wife and daughter in a car crash in 1972 and testified to his strength of character following his son Beau’s death from cancer in 2018.

“There are those who want to tell us that our country is hopelessly divided, that our differences are reconcilable but that is not what I see over these last few months,” Jill said.

“We just need leadership worthy or our nation and worthy of you, honest leadership to bring us back together to recover from this pandemic and prepared for whatever else is next.”

After her remarks, Joe called his wife: “The love of my life and the rock of our family.”

“At a time like this, the Oval Office should be a command centre. Instead, it’s a storm centre. There’s only chaos,” Clinton said.

“Just one thing never changes – his determination to deny responsibility and shift the blame,” he said. “The buck never stops there.”

On the day the Senate Intelligence Committee released a 1,000-page report on Russia’s interference in the 2016 election, Democrats John Kerry, the former US secretary of state, and Sally Yates, a former deputy attorney general, criticised Trump’s unwillingness to address the issue.

“Donald Trump pretends Russia didn’t attack our elections,” Kerry said. “And now, he does nothing about Russia putting a bounty on our troops. So he won’t defend our country… The only person he’s interested in defending is himself.”

The Republican-led Senate committee report found that the FBI had ample cause to open an investigation into Trump’s 2016 campaign. 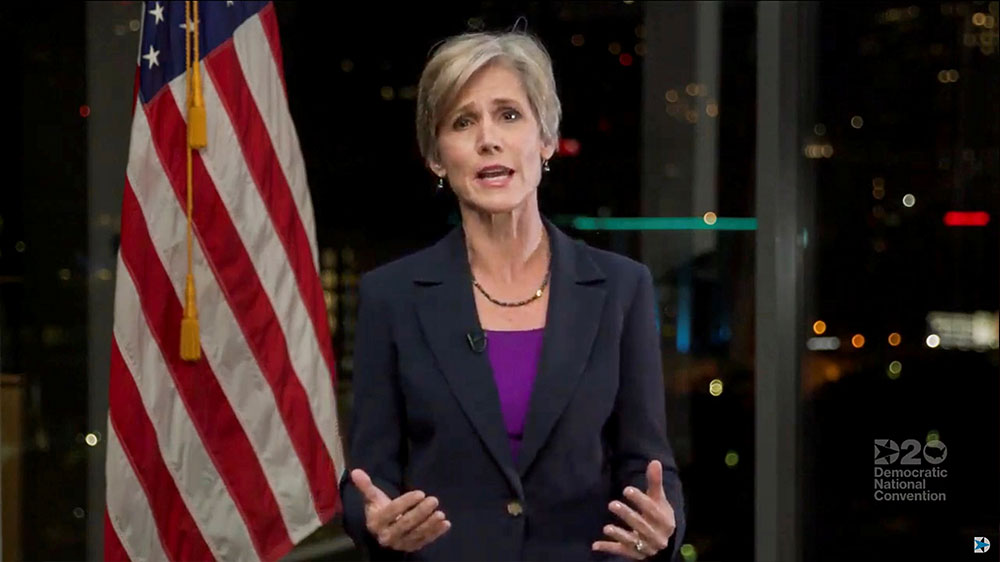 Yates, who served as acting US Attorney General in the early days of the Trump administration, had warned the Trump White House about contacts with Russia in 2016-2017.

“From the moment President Trump took office, he has used his position to benefit himself rather than our country,” Yates said.

Trump claimed Obama and Biden directed US agencies to spy on his campaign in 2016 and denied coordinating with Russia, calling the Democratic allegations a “hoax”. 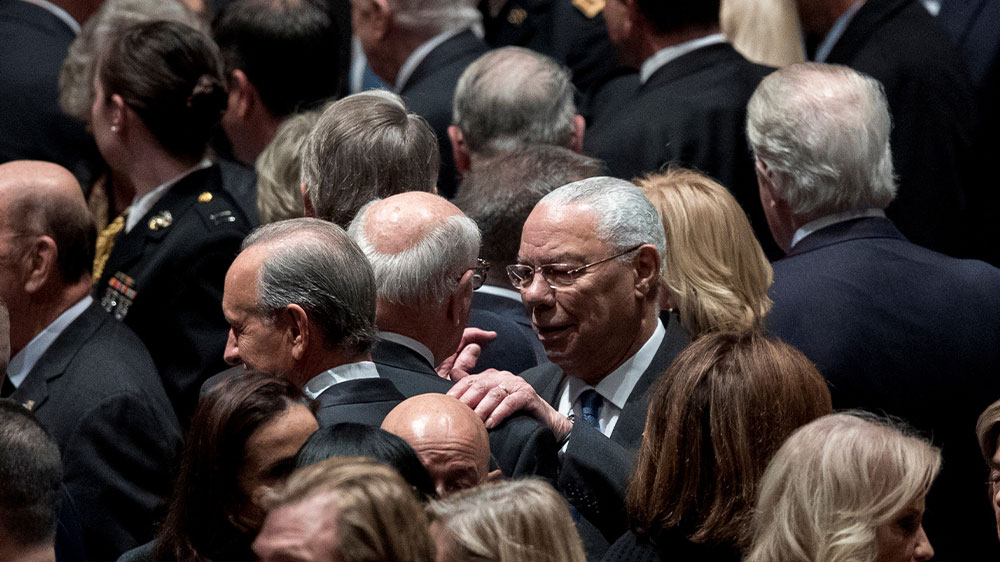 For a second night, the Democrats featured Republicans.

Colin Powell, who served as secretary of state under George W Bush and appeared at multiple Republican conventions in past years, endorsed Biden.

“Our country needs a commander in chief who takes care of our troops in the same way he would his own family. For Joe Biden, that doesn’t need teaching,” he said.

Powell said he learned the same values “growing up in the South Bronx” that Biden did growing up in Scranton, a blue-collar city in northeastern Pennsylvania.

A former chairman of the Joint Chiefs of Staff, the top military position in the US, Powell’s support for Biden is likely to sway the votes of military personnel and their families concerned about national security.

A number of former Bush administration officials and military leaders have already formed a group to back Biden in the November election. 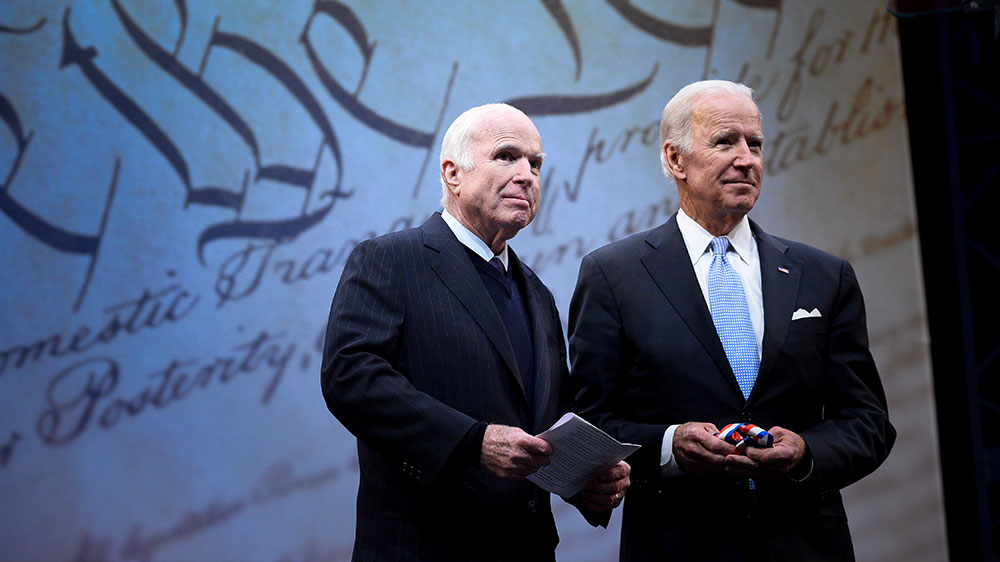 In addition to Powell, Cindy McCain, the widow of late Senator John McCain, provided her voice for a video that aired during Tuesday’s convention featuring Biden and McCain’s friendship.

The two were members of the Senate together for 20 years before Biden became Obama’s vice president.

While McCain publicly supported Trump as the Republican nominee in 2016, their relationship behind the scenes was strained, with Trump being dismissive of McCain’s record as a prisoner of war in Vietnam.

With the convention, the Democrats hope Biden will get a boost in opinion polls, which show him ahead of Trump by an average of 50.2 percent to 42.5 percent, according to a survey by RealClearPolitics.com.

Next week, the Republicans will hold their convention to officially endorse President Trump’s bid to stay in power for another term.