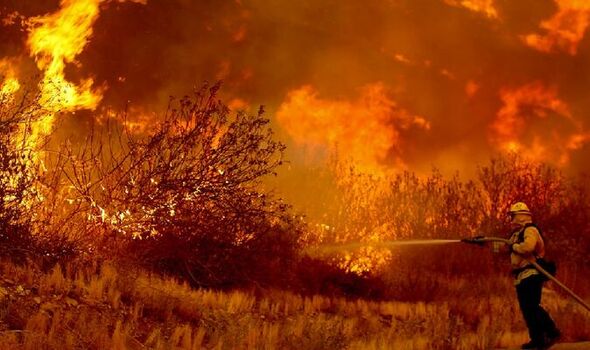 The flood prone US southeast coast may be in store for catastrophic wildfires, according to local leaders. Most of the region is already dealing with stronger storms, as evidenced by Hurricane Ian which made a second landfall in the Carolinas after devastating Florida.

Western US states like California are most often associated with the threat of wildfire – conditions in the state for fires to burn out of control are often perfect with record temperatures, low humidity and high winds.

Now, similar threats are spreading to states not usually associated with wildfires. North Carolina saw 5,151 wildland fires in 2021, the third most in the country after California and Texas.

In fact, North and South Carolina have some of the largest numbers of properties threatened by wildfire after California and New Mexico, according to a May report by First Street Foundation, a non-profit that maps climate risks.

Ed Kearns, the group’s chief data officer, said: “Wildfire risk is increasing so much faster than even flood risk is across the U.S. And it’s likely to affect areas that aren’t thought of as wildfire-prone areas right now, but will be soon.”

In Nag’s Head, on the Outer Banks of North Carolina, locals are usually worried about the flooding.

However, the dry grass and sand dunes which protect the Atlantic Coast from storms are also, now, prone to wildfires.

Superintendent of the National Parks of Eastern North Carolina warned: “You put a match to this, and it’s going to burn very, very quickly.”

Miles-long stretches of the reeds, invasive wetlands plants that only grow back thicker after being cut or burned, have proved a management challenge around Nags Head, and threaten to increase the fire risk to nearby homes.

Inland parts of Dare County have long endured wildfires. The peat soil there, versions of which are found throughout the southeastern United States, is more susceptible to sustained burning than the wetter and sandier Nags Head area.

But the threat is growing, John Cook, a district forester with the North Carolina Forest Service and and his colleague John Van Riper reeled off a spate of recent wildfires in Dare County and around the state.

Mr Van Riper said: “There’s just been so many damn fires, too many fires.”

Mr Cook added: “Hurricanes, fires, floods – we got a little bit of everything here.”

As the climate crisis worsens, scientists expect that both the threat of more powerful hurricanes and more common wildfires will increase, creating dual catastrophes for the east coast – fires are likely to happen more often in areas which, before now, were not though of as high risk.

Global temperatures have risen more than 1.2 degrees Celsius (2.2 Fahrenheit) since preindustrial times, and oil, gas and coal use – the major driver of that increase – are still rising, despite pledges to slash emissions.

Top climate scientists say 1.5C of warming – the more ambitious warming limit set in the 2015 Paris Agreement – could be passed within a decade.

They fear that could trigger irreversible ecological tipping points, from surging sea levels as polar ice melts to spiking temperatures as methane – a potent driver of warming – escapes thawing permafrost.