Amid a pandemic that has claimed more than 230,000 American lives, cost millions of jobs and upended the election day itself, it is thought a record turnout cast their ballot for Donald Trump or Joe Biden. Nearly 100 million people had already voted by post or other means to help keep the spread of Covid-19 low. However, battleground states including Michigan and Pennsylvania were making news not for the turnout but for setting one-day records for new coronavirus cases.

Contrary to Trump’s repeated claim the States is “rounding the turn”, the US is seeing more cases than ever.

And although millions of Americans view the President’s handling of the pandemic as the most significant issue in the election, he predicted he would win by a wider margin than in 2016.

But Mr Trump appeared on Fox News and said: “They’ll go, ‘Mr President, tell me: who is the country that’s most difficult to deal with? Is it Russia, is it China, is it North Korea?'”

“No, by far the most difficult country to deal with is the US. It’s not even close.”

He said he would declare himself the winner “only when there’s victory. There’s no reason to play games. 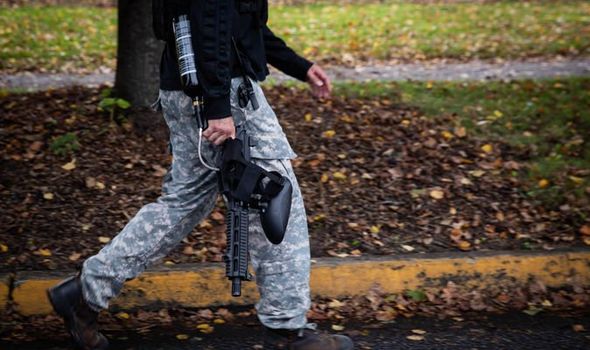 “I look at it as being a very, a very solid chance of winning here… I think a lot of that has to do with the tremendous crowd size.”

Later, during an appearance in Arlington, Virginia, he said in a croaky voice after numerous rallies this week: “I think we’re going to have a great night.

“But it’s politics and it’s elections, and you never know.

Bloodshed “Winning is easy. Losing is never easy – not for me it’s not.”

His Democrat rival Mr Biden appeared in his hometown of Scranton, Pennsylvania, with his wife Jill and two grandchildren after attending church in Greenville, Delaware. The division between the candidates has left fears of bloodshed on the streets.

Cities across the US have spent days boarding up businesses and shops, removing fixtures such as bins and bus stops that could be used in riots and readying armed police units and the National Guard.

On one side are Trump’s supporters backed by far-Right militia and white supremacist groups. On the other, are Leftie anarchists and anti-fascist groups such as Antifa.

They have been emboldened by the language used by Mr Trump who, during a TV debate with Mr Biden, refused to disavow far-Right groups, telling one to “Stand back and stand by.”

White supremacist groups took that to be a call to arms.

Activist groups across the country are already planning protests and demonstrations for after Election Day, anticipating foul play at the polls or in the ballot counting room.

In Portland, Oregon, the backdrop to months of violence following the deaths of black men and women by police this year, a right-wing armed group said they would show up at ballot drop-off sites with their weapons on show. 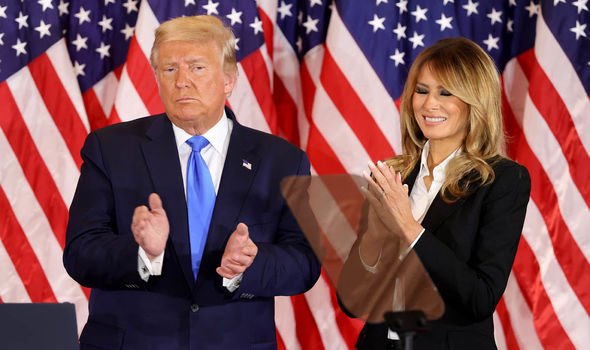 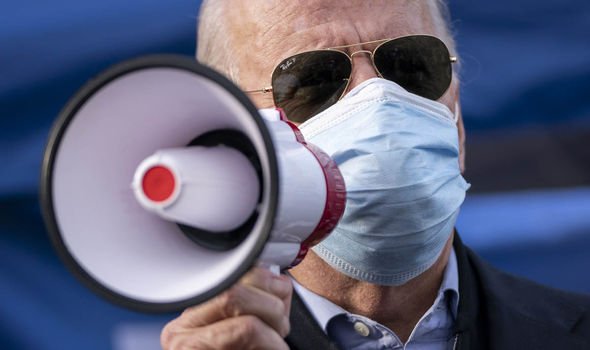 Some extreme left-wing organisers prepared to be there as well.

In Philadelphia, groups banded together to ensure a fair election process and stage protests if there appeared to be any voter intimidation.

The famous Rodeo Drive in Beverly Hills, California, was shrouded in darkness while the street was closed to pedestrians and vehicles. Chicago’s “Magnificent Mile” was armed with “everything from snow ploughs to salt trucks” to control crowds, said Rich Gamble, chair of the Magnificent Mile Association.

In New York, the police department’s chief Terence Monahan said they had a plan in case any protests turned violent.

He added: “There is no secret that this election is more contentious than in years past.”

On Monday night a Jewish cemetery in Grand Rapids, Michigan, was vandalised with pro-Trump graffiti sprayed on headstones, soon after a visit by the President.

Police were also prepared for trouble in Seattle, Miami, LA, Orlando, Philadelphia and Minneapolis, where George Floyd was killed in May.