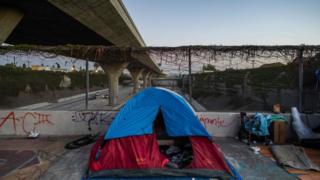 A man in California has been charged with poisoning eight homeless people with a substance described as “twice as strong” as pepper spray.

William Robert Cable, 38, is accused of giving at least eight people food laced with oleoresin capsicum and filming them as they became ill.

Several of the alleged victims were hospitalised and authorities believe the suspect could have targeted others.

Mr Cable faces up to 19 years in prison if convicted.

“These human beings were preyed upon because they are vulnerable,” Orange County’s district attorney Todd Spitzer said.

“They were exploited and poisoned as part of a twisted form of entertainment, and their pain was recorded so that it could be relived by their attacker over and over again.”

According to the Orange County District Attorney’s Office, the suspect approached vulnerable homeless people in the Huntington Beach area in Ma and offered them food laced with a substance “twice as strong” as the pepper spray used by police.

Oleoresin capsicum is derived from chilli plants and is the main active ingredient used in pepper spray. The strength of each spray varies between manufacturers.

Some of the victims were told they would be taking part in a “spicy food challenge” and were given beer to encourage them to take part, while others were unaware the food had been tampered with.

Upon eating the food, they suffered reactions including seizure-like symptoms, difficulty breathing and vomiting, the District Attorney’s Office said.

Cable, who is being held on $500,000 bail, was arrested last month and faces eight charges of poisoning, as well as a further count because one of the victims was elderly. He has also been charged with involving a minor in the attacks.

Officials in Orange County have appealed for the public to help identify any further victims or suspects.

Last year a Spanish YouTuber was sentenced to 15 months in prison after tricking a homeless man into eating an Oreo biscuit filled with toothpaste.