A California sheriff’s deputy has been accused of playing both cop and burglar, in a bizarre case that was captured by surveillance cameras at a dead man’s home in Orange County.

Deputy Steve Hortz, who has been with the sheriff’s office for 12 years, was arrested on a burglary charge Thursday in connection with the incident. He was booked into the jail and placed on administrative leave.

Hortz was officially called to a home in Yorba Linda, Calif., after a man in his 70s died of natural causes on July 20, the sheriff’s office says. Hortz then allegedly returned to the unoccupied home three times over the course of a month and exited “with stolen property,” the Orange County Sheriff’s Office said in a statement.

A suspect was caught on video by home surveillance footage, police say. The late homeowner’s lawyer shared that footage with authorities on Wednesday, which led to Hortz’s arrest.

“The suspected criminal actions of this deputy are a violation of public trust, are inexcusable and intolerable,” Sheriff Don Barnes said in the statement.

“I will hold accountable deputies who do not honour the oath they swore to uphold.”

The suspect allegedly visited the home in his official capacity on July 20. He then returned to the back door of the home on July 27 and, while still in uniform, “broke into the unoccupied residence,” according to police. It’s unclear if he took anything at that time.

He allegedly returned to the home in civilian clothes early on Aug. 10 and Aug. 16 and could be seen leaving with objects in his arms, according to police.

“Deputy Hortz returned to that residence in the early morning hours, gained entrance to the residence through the unlocked door, and was seen on recordings removing items from the residence,” Barnes said at a news conference Thursday.

Authorities say the suspect took a wide variety of items including two safes, a rifle case and ceiling fans.

Police released a surveillance video montage showing a suspect at the back of the house on what appears to be three separate occasions.

On the first occasion, he can be seen inspecting the window and door during the day while wearing a deputy’s uniform.

On the second occasion, a man in a grey hoodie can be seen approaching the door with a flashlight at night. The video shows the suspect leaving the home with two ceiling fans, then wheeling a safe out on a dolly. 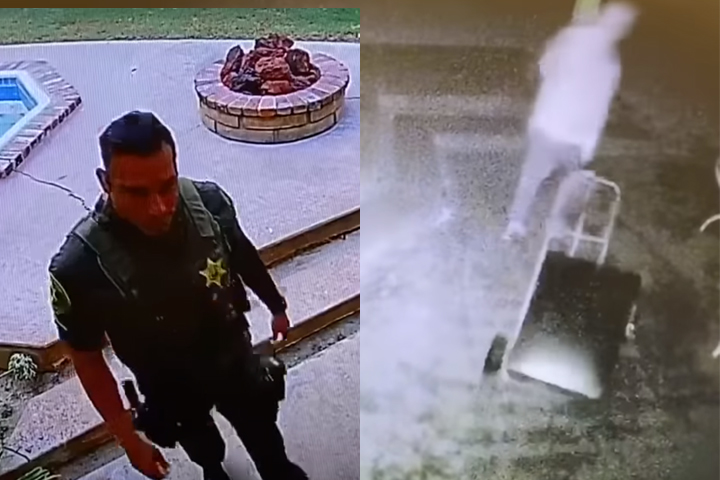 Video from the third occasion shows a man in a white T-shirt and toque at night. He can be seen leaving the house with a bag slung over his back and various items in his hands.

Hortz is the second Orange County deputy to face charges for alleged crimes related to his job this week.

Orange County Deputy Angelina Cortez, 41, was charged with filing a false police report in a separate case on Wednesday. Cortez is accused of taking a suspect’s credit card and giving it to her son to use, according to the Orange County district attorney’s office.

Hortz was still being paid after his arrest, KTLA reports, but the sheriff’s office is looking into placing him on unpaid leave.

Barnes said if convicted, the suspect does not deserve to work in law enforcement again.