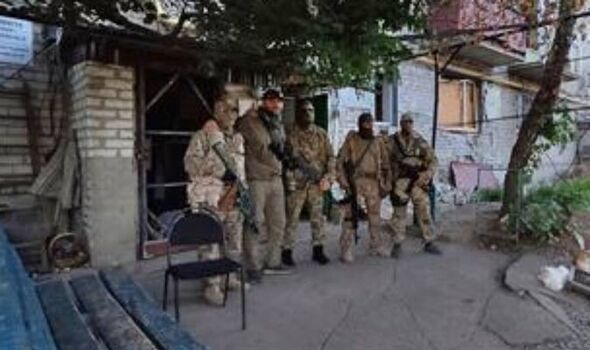 War reporter Sergei Sreda posted a picture last week of him grinning alongside mercenaries in full combat gear to boast about his visit to the Wagner Group’s base.

But one particular image he released, showing a street sign, gave away the location – at Popasna in the Sievierodonetsk district of Luhansk.

Sreda bragged how the troops had welcomed him “like family”‘ and told him “funny stories”.

The Ukrainian military yesterday confirmed it had used the photo to target the building with the American-provided HIMARS rocket system.

The strike on Sunday left the base in ruins.

Telegram channels with links to Wagner Group – mercenaries fighting for the Russian president – put up photos of the aftermath, including injured soldiers being carried away on stretchers.

The apparent blunder is likely to infuriate Putin, whose forces are almost six months into what was supposed to be a days-long war.

Setback after setback have plagued the Russian forces.

They were made to retreat from Kyiv in April, their Black Sea flagship Moskva was sunk in the same month, Kremlin troops then had to withdraw from Snake Island in June and last week an airbase in Crimea was all but wiped out.