There is no let up by farmers protesting at the Singhu border in Delhi.

The passion remains the same and the numbers have grown. A large number of women protesters can be seen marching and shouting slogans against the government.

It has been more than 70 days since the farmers laid siege on the three borders of the national capital.

They have left their fields, families and crops to camp in the dead of winter and voice their concerns about the three agricultural laws passed by the Indian government.

They argue that the three laws will deregulate crop pricing, reduce income and allow private players in the sector, leaving them vulnerable to large corporations.

Prime Minister Narendra Modi has said the laws will help increase farmers’ incomes, as they will be able to sell their crops outside designated government markets.

Eleven round of talks between the government and farmers’ unions have failed to resolve the dispute. The government was even willing to suspend the laws for 18 months, but farmers would accept nothing short of repealing the laws completely.

Shamsher Singh, a 32-year-old farmer from Ropar, said “We will also not go back, we are the followers of Guru Gobind Singh (the tenth Sikh guru who transformed the Sikh faith). We have to die some day. Rather than dying in hospital taking medicines, it’s better to die a martyr.”

Last week passions ran high and the months of peaceful protest descended into violence as farmers marched into Delhi.

The police fired tear gas and even charged at them with batons. But they were overwhelmed and outnumbered.

Hundreds of protesters were injured and a farmer, 26, died when his tractor overturned after hitting a police barrier.

Protesters entered the historic Red Fort and unfurled their flag – at the very place where the prime minister makes his yearly speech on Independence Day.

It marked a symbolic moment in their resistance.

The police have arrested over 100 people for the violence.

Security has been tightened to unprecedented levels, concrete has been poured into rows of cement barricades to construct walls on roads, and iron spikes and nails have been embedded into the roads at the border.

Sky News travelled to Punjab to get a sense of what fires the protesters’ emotions.

In the village of Kandala, with around 300 households, the only topic of discussion is the protest. 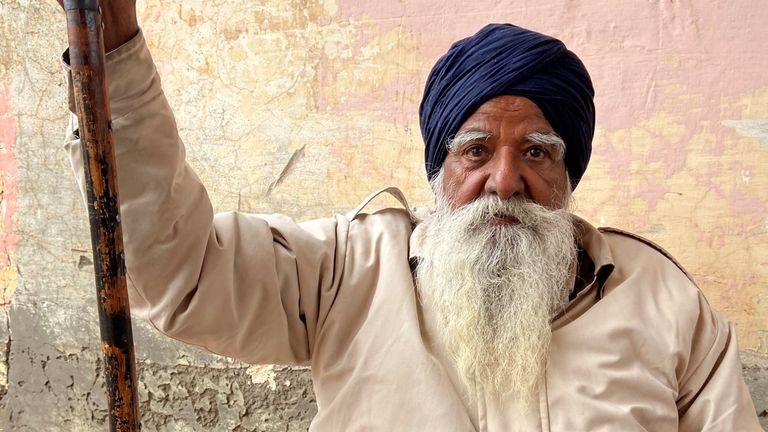 Sardar Sandhu Singh, 80, told Sky News he had “never ever seen anything like this before. Whatever is happening is an injustice to the farmers”.

Jasbir Singh said: “With folded hands I request Prime Minister Modi to remove the laws. We all have to die someday. It’s ok if we have to now – we are as good as dead. We shall not go back till the laws are removed.”

It had been pouring rain for the last four hours and the cold was biting. One could really feel for the protesters, especially the elders sitting it out. 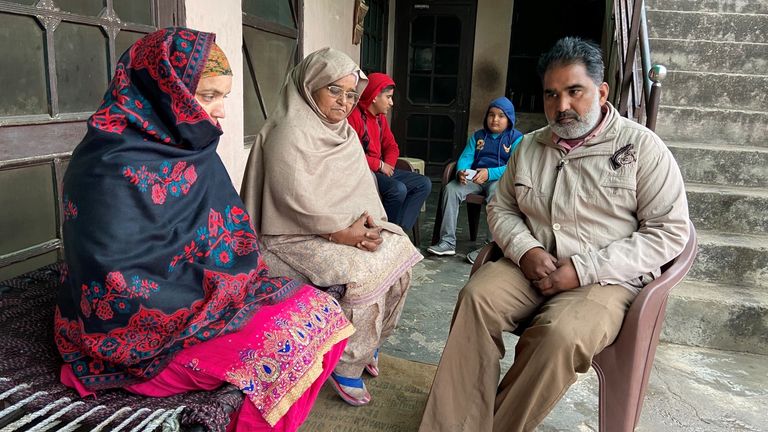 At the home of Gurmeet Singh, 67, the family is yet to reconcile their loss. As an elder, Mr Singh was leading the protest from his village. He had organised two tractor trolleys with people, rations, and supplies to Delhi.

On the 12th day of his protest at Singhu border, he died of a heart attack.

Unable to hold her tears, his widow Jaspal Kaur said: “His tractor and cycle is standing here, I can’t bare looking at it. He led people. He said it’s most important for me to go, it’s a matter of our village pride – my pride. “I am very sad but I am proud of him. Everyone has to die one day – that’s fate.”

Breaking down, his son Sukhvir Singh said: “The government is responsible. It made these laws and people have gone there protesting and are dying.”

According to a farmers’ union over 200 protesters have died so far. Sky News cannot corroborate this number.

An overwhelming majority in Punjab are farmers. Almost every home in these villages has sent men and rations to the protest – a sort of a relay of keeping the supply lines open and the pressure on. 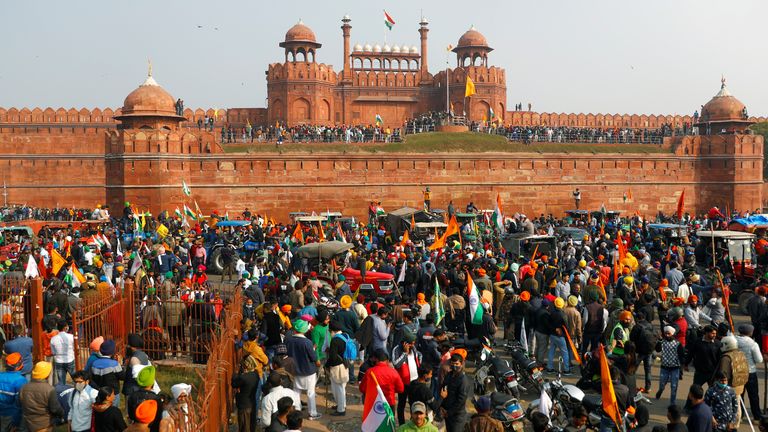 On our way back we met Manjeet Singh Dalhiwal, from Jagraon, on the highway. He was carrying drinking water and rations.

“My sister in Manchester sent me money to buy these rations for the protests, we are getting support from everyone,” he said.

Right-wing activists protested against singer Rihanna and environmentalist Greta Thunberg for lending their support to the farmers. They burnt posters and shouted slogans against them for interfering in the country’s internal matter.

India’s foreign ministry released a statement criticising “celebrities and others” for their “neither accurate nor responsible” comments, and top ministers and celebrities tweeted against “propaganda” that threatened India’s unity.

Farmers’ unions have called for a three-hour countrywide road blockade of state and national highways on Saturday.

Explainer – The farmers’ protests in India

More than half of the 1.3 billion people living in India work on farms but agriculture contributes only about a sixth of the country’s gross domestic product.

Agricultural reforms are most needed in the country but the issue is a quagmire to handle.

Small holdings, shrinking productivity, the increasing cost of living and lack of modernisation have had a stranglehold on this sector. The government doles out large subsidies to keep things under control.

Why are there protests in India?

Farmers have been protesting against three farm laws promulgated by the government under Prime Minister Modi. They want the three laws scrapped.

The protests have mainly been led by farmers from Punjab and Haryana, but now thousands are joining in from other parts of the country particularly from western Uttar Pradesh.

What will India’s new farming rules do?

The Farmers’ Produce Trade and Commerce (Promotion and Facilitation) Act allows farmers to sell their produce outside the Agriculture Produce Markets Committees (APMC). This means traders can purchase from a farmer at a mutually agreed price.

The Farmers (Empowerment and Protection) Agreement of Price Assurance and Farm Services Act allows farmers to do contract farming and market their produce freely.

The Essential Commodities (Amendment) Act takes removes food grains, pulses, edible oils and onion from the essential list and makes it unrestricted for trade except in extraordinary circumstance. What are farmers saying?

Farmers say the laws will deregulate crop pricing and eventually get rid of the Minimum Support Price (MSP) that guarantees them an income by setting a uniform price for the crop.

Most farmers are small and have low annual incomes. They are in no position to take their produce out of their district to trade. It will also add to the expenses of a farmer.

They believe in the long run a consortium of private players will develop leaving them vulnerable to large corporations and market forces.

The dispute mechanism does not allow them to go to court. Instead it will be brought before a bureaucrat, who the farmers believe will most likely favour big business. The laws are not supported by sufficient regulation they argue.

How does this affect people in the UK?

There is a very large diaspora from Punjab living in the UK with farming backgrounds. There are very close ties with family and friends back home.

More than 100 UK MPs across party lines have urged Prime Minister Boris Johnson to take up the issue with his Indian counterpart and to press for a “speedy resolution of the current deadlock and democratic human rights of citizens to peacefully protest”.

The protest or the laws will not have any direct impact on the UK.