The WHO also warned that the world is still in the middle of the pandemic’s first wave, and a second peak is possible. 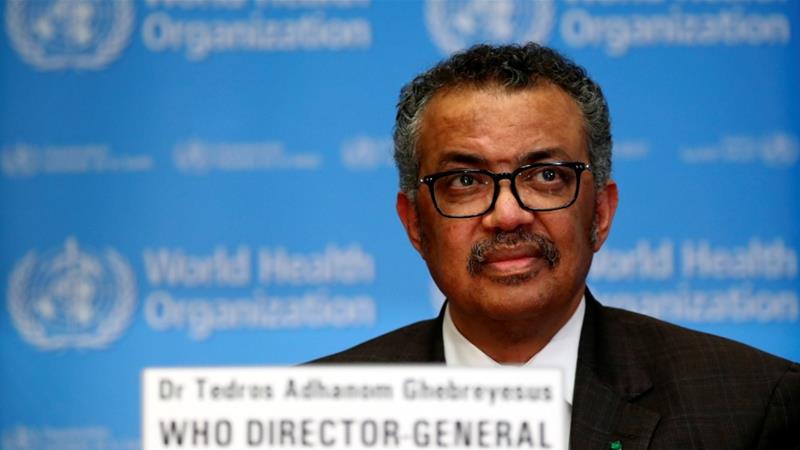 The World Health Organization (WHO) has temporarily suspended testing of the malaria drug hydroxychloroquine as a potential treatment for COVID-19 as a precautionary measure, WHO Director-General Tedros Adhanom Ghebreyesus said during a news conference on Monday.

Meanwhile, Mike Ryan, head of the WHO emergencies programme, warned in the same virtual news conference that, despite countries easing lockdowns, the world is “right in the middle of the first wave” of the outbreak, and a there could be a second peak within the wave.

The statements come days after US President Donald Trump announced he had been taking hydroxychloroquine as a preventive measure against the virus. The president, who has said he has since stopped taking the drug, had long touted its benefits as a possible treatment for COVID-19, the disease caused by the novel coronavirus, even as health experts warned it might not be safe.

“The executive group has implemented a temporary pause of the hydroxychloroquine arm within the Solidarity trial while the safety data is reviewed by the data safety monitoring board,” Tedros said in the online briefing.

The WHO had previously recommended against using hydroxychloroquine to treat or prevent coronavirus infections, except as part of clinical trials.

Ryan added the decision to suspend trials of hydroxychloroquine had been taken out of “an abundance of caution”.

Other arms of the WHO’s so-called “Solidarity Trial” – a large international initiative to hold clinical tests of potential treatments for the virus – would continue, the officials said.

No date for China mission

The WHO’s Ryan also told reporters on Monday that he has been in daily discussions with China on the origins of the coronavirus, but said there was still currently no date set for a scientific mission to the country.

The US and Australia have been the most vocal proponents of such an investigation, and have accused Beijing of not being transparent.

Trump and other US officials have also pushed the theory in recent weeks that the virus emerged from a lab in Wuhan, the Chinese city where the outbreak began. China has strongly denied the claims, but said it would be open to an independent examination after the pandemic has been brought under control worldwide.

During last week’s World Health Assembly, member states passed a resolution calling for a probe into the international response to the pandemic, an intentionally broad mission which would include examinations of the responses of individual countries and the WHO.

To date, more than 5.4 million infections have been confirmed worldwide since the virus first emerged in December of last year, with over 345,000 deaths globally.

Despite an apparent downward trend in new deaths and cases in many hard-hit countries, Ryan urged countries across the world to remain vigilant.

“We need also to be cognizant of the fact that the disease can jump up at any time,” he said. “We cannot make assumptions that just because the disease is on the way down now, it is going to keep going down and we get a number of months to get ready for a second wave. We may get a second peak in this wave.”

Also on Monday, WHO special envoy Samba Sow warned that Africa could face a “silent epidemic” if its leaders do not prioritise coronavirus testing.

Africa has confirmed more than 112,000 cases and more than 3,300 deaths, a rate considered remarkably low. However, experts have warned the full impact of the pandemic could not be known without more widespread testing.

“My first point for Africa, my first concern, is that a lack of testing is leading to a silent epidemic in Africa. So we must continue to push leaders to prioritise testing,” said Sow.