The Covid baby boom that many people predicted last year has not happened, but another kind of baby boom is underway. Restaurants and food businesses have been born during the pandemic at a rate that almost no one predicted a year ago, when dining rooms across the United States were ordered to close.

After a steep plunge that reached its lowest point last April, openings have bounced back nearly to prepandemic levels, according to a year-end analysis by Yelp. The company reported that 18,207 restaurants and food businesses were first listed on its service during the last three months of 2020, just 4 percent less than in the same period in 2019. In one category, “grab-and-go services,” including food trucks and bakeries, new listings even went up.

Starting a restaurant in the middle of a pandemic may sound about as ill-advised as going for a cruise in a rubber raft in the middle of a nor’easter. According to a survey of operators conducted by the National Restaurant Association, 17 percent of restaurants in the United States had closed permanently or long-term by Dec. 1. Many were victims of the enormous shift in household food spending brought on by the pandemic, which redirected money that had been used for eating out toward groceries, delivery and takeout.

Paradoxically, the challenges that killed so many existing businesses helped fuel the growth of the Covid Baby restaurants. In interviews, people who opened restaurants during the pandemic say that never having operated in normal conditions gives them certain advantages. Like start-ups competing with legacy companies, they may have lower overhead costs and the agility to adapt to a shifting environment. 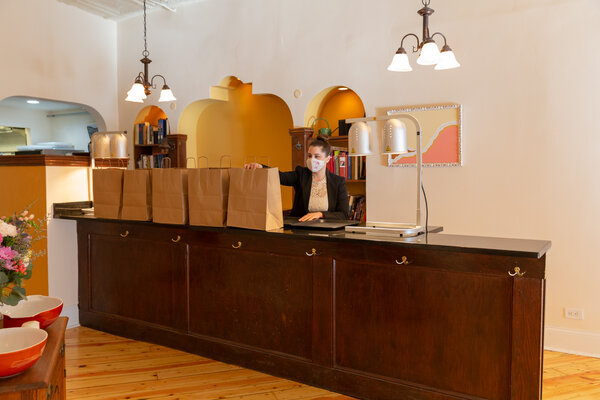 “We looked at it as this great opportunity,” said Lacey Irby, who had “fallen in love with” a space for the restaurant she planned to open, Dear Margaret, just before the virus arrived in her city, Chicago. She backed out. With the chef, Ryan Brosseau, she drew up a new business plan and menu that emphasized takeout and delivery much more heavily.

By the time they were ready to dip their toes in the rental market again, many landlords were ready to make deals. The space in the Lakeview neighborhood where Dear Margaret finally opened in January is much smaller than the original one, and the rent is nearly 50 percent lower. The lease calls for several months’ free rent, followed by a reduced amount that will last until business is nearly normal again.

Not every restaurateur who opened a new place in the past year was lucky enough to find a landlord as accommodating. But going into business after the initial shutdowns gave them other advantages, some of them say. It meant they didn’t have to pivot, which is easier on a basketball court than in a kitchen where workflows, budgets and inventory were designed around serving meals in a crowded dining room.

Another Chicago restaurant, Kasama, passed its final preopening inspections last March, on the day before the city issued the first closing orders. The timing seemed catastrophic, but turned out to be “a silver lining,” said Genie Kwon, who shares the ownership and the title of chef with her husband, Tim Flores.

“We didn’t open just before, so we were able to adapt to our new model, which is totally different from what we anticipated,” Ms. Kwon said.

That flexibility helped when breakfast and lunch, which had been expected to play a minor role in their revenue, took off. By day, Ms. Kwon’s ham-and-cheese Danish and ube-huckleberry Basque cakes drew people from their neighborhood, Ukrainian Village. She and Mr. Flores became experts at steaming lattes and remembering their regulars’ names and favorite coffee drinks.

Like many chefs have done this past year, they had to adapt their cooking so it would hold up during a ride in a takeout box. Before adding a dish to the menu, they said, they would let it sit out “for an hour or two” and then taste it.

Items that failed the test — seafood dishes and almost anything fried — have been postponed until Kasama opens its dining room. The chefs did not want to wait to serve lumpia, so they tested every lumpia wrapper on the market until they found one that kept its crunch. To keep food warm, they have turned to such ideas as packaging duck dumplings like the ones Mr. Flores’s mother used to make with an insulated container of hot mushroom broth. The dumplings cool in transit, but the broth will reheat them.

During a restaurant’s preopening rollout and over the first few months of business, customers get their first impressions of what it offers. These can be hard to shake, which is one reason course corrections later on don’t always succeed.

Many of the Covid Baby restaurants, though, have always been known to their customers as a useful service that helps them feed their families, not a noisy and crowded destination they might try one day when reservations aren’t booked weeks in advance. This gives the start-ups a valuable degree of flexibility.

For Leah & Louise, a gussied-up juke joint in Charlotte, N.C., delaying their opening until last June meant that customers never got attached to the original theme — “small plates Southern food by way of the Mississippi River Valley,” in the words of the chef, Greg Collier, who grew up in Memphis. As it turned out, small plates are not a hot item in the pandemic.

Chicken sandwiches are, though.

Mr. Collier did not have a chicken sandwich on the first draft of his menu. He came up with one after the opening, on the theory that people with tightened budgets might spring for it more readily than for some of the more unusual items he was cooking. He was right.

The sandwich helped keep the business above water. Still, Mr. Collier has mixed feelings about it.

“I don’t want to give the impression this is something we threw together in the middle of the night on a weed binge,” he said. “It’s a good chicken sandwich. But I really want to make dishes that tell our story and say something about who I am, and a chicken sandwich really isn’t that. But it is what it is.”

Letting customers lead has often required restaurants to adopt more than one way of doing business. New businesses without old habits have had an advantage here, too.

NiHao, in Baltimore, opened in July with a Chinese menu featuring several adaptations of the Sichuan dishes that have made the chef Peter Chang a cult star. Mr. Chang owns the restaurant with his wife, Lisa; his daughter, Lydia; and Pichet Ong, the prolific chef and pastry innovator.

From the start, NiHao took orders over the phone and through its website. Then it added several outside delivery apps. Mr. Ong had set up an Instagram account that was meant to be more educational than commercial; he told stories about Chinese culture and cuisine. It became a customer-service channel, though, as people began sending direct messages asking about specials or trying to place orders.

NiHao also began to experiment with the Chinese-language messaging app WeChat. The platform helped the restaurant connect with a local Chinese-American community whose size and appetite surprised the owners.

Chinese-speaking customers who weren’t comfortable sitting inside after NiHao resumed indoor dining, in September, could use WeChat to buy meal sets. These are groups of dishes, from appetizers to one of Mr. Ong’s desserts, that worked together and would feed a family. Comments on the platform helped the chefs write the detailed reheating instructions that now come inside the package.

“They would tell you, ‘This did not heat up well,’ or ‘I had a hard time because I did not have a big enough pot at home,’” Mr. Ong said.

The operators of Covid Baby restaurants expect to keep many of their pandemic adaptations once the virus is under control. QR codes, those arrays of tiny squares that will direct your phone to an online menu, will be permanent fixtures of NiHao and & Louise, the owners said.

The most significant change may be the attention to preparing takeout dishes that will not only hold up well but can also communicate something of the flair and style usually found only in a restaurant dining room.

“From one perspective, it’s simple,” Mr. Ong said of the movement toward fancier takeout. “But from another perspective, it’s quite revolutionary. It’s the direction a lot of food service is going toward — prepared. You can still have true integrity in flavors and presentation by restructuring how it’s packaged.”

Mr. Collier and his wife and business partner, Subrina, expect to-go orders to play a significant role in their company from now on. They intend to have separate takeout windows or entrances in any future restaurants they open, for example. “What we’ve discovered is, there is a higher-end way of doing takeout,” Mrs. Collier said.

The Colliers say they will have sizable outdoor patios, too. The couple even plan to buy more individual dining tents, one of the ways they hope to “pandemic-proof” their restaurant group.

Another pandemic innovation that will remain at Leah & Louise is the rice bowl. Served with seasonal vegetables, field peas and a dressing, its price is listed on the menu as “$PWYC” — pay what you can. The Colliers are Black restaurateurs doing business in a mostly Black neighborhood where many residents were out of work at some point in the past year. “We wanted people who had only $5 to dine to come in and feel welcome,” Mrs. Collier said.

Not every novice owner sees takeout as the salvation of the restaurant business. During the pandemic, Andreas Koutsoudakis Jr., a hospitality lawyer by day, came into possession of a Manhattan diner, Tribeca’s Kitchen. Delivery and takeout had brought in about $30,000 a week. He shut them off and closed the kitchen for several months. When he reopened in July, he had a new menu with items that you’d have to come to the restaurant to eat, like grilled octopus with paprika salsa verde.

“Because the world needs human connection,” he said. “If you eliminate that, hospitality is no longer a relevant industry. It doesn’t have the capability of touching lives. It’s just a product you’re pumping out.”

Mr. Koutsoudakis inherited the restaurant after its founder and owner died from Covid on March 27. His name was Andreas Koutsoudakis Sr.

“It crushed me, just leveled me,” Mr. Koutsoudakis said of his father’s death. “The only place I could be free was at the store.”

He would go to the empty diner and sit in the stillness. Even with the lights on, it was not a bright room, with paneling, black countertops, burgundy booths, dark wooden tables and brown floor tiles that looked like wood. Alone, he meditated on what his father had built, picturing ways that he could honor that while making a restaurant that was new in all respects but the name and address.

When his father founded Tribeca’s Kitchen in 2014, it had been one of the few diners in the city to offer some organic items. Mr. Koutsoudakis decided to double down on that, hiring chefs with a fine-dining background and charging them to use even more fresh organic ingredients than before. The walk-in freezer that had stored ready-to-fry mozzarella sticks and Buffalo wings became a refrigerator.

The last piece of the puzzle was the interior. “The design is 100 percent a response to Covid,” he said. “There’s a lot of mental health issues out there. People are lonely, they don’t have an escape.”

Mr. Koutsoudakis cleared out all the dark materials, replacing them with brighter, more cheerful ones. His hope was that the reflected light and less cluttered look would make customers feel happy, the way his father’s hospitality once did.

“There needs to be sunshine, life and the future,” he said.