Potato, squash, cabbage, celery root, parsnips, carrots — yes, you can fry them all!

Hanukkah is almost here, and I’m looking forward to heaps of beautifully fried latkes, golden and crisp on the outside, warm and tender on the inside.

I find that I can never resist a potato latke, grated or mashed, eaten standing and chatting in a friend’s warm, oil-splattered kitchen. But you can play with vegetables, binders and seasonings, whether it’s potato and onion, celery root and parsnip or butternut squash and sage.

This recipe for a giant okonomiyaki-inspired latke, from the Brooklyn restaurant Shalom Japan, includes cabbage, bean sprouts and scallions. If you try it, make sure to use kombu dashi to keep it vegetarian. And on the ever-so-slightly sweeter side, there are apple-potato latkes with cinnamon sour cream and apple and sweet potato latkes seasoned with ginger and warm spices.

However your tastes lean, here are a few things to keep in mind for crisp, delicious latkes:

Squeeze out the extra liquid.
Whether you use a box grater (watch those knuckles!) or food processor, make sure you get rid of as much of its water content as you can, if you’re working with a heap of grated potato, apple or anything juicy. Just wrap the mass in a clean dish towel and firmly squeeze it over the sink.

Don’t crowd the oil.
It might seem like dropping half a dozen latkes into the pan will save time, but if the patties are bumping up against each other in the oil, things are going to cool down — and slow down — leaving you with soft, greasy latkes. Get the oil nice and hot, then make sure there’s plenty of room in the pan.

Drain and season.
Even if you seasoned the mixture, a generous sprinkle of finishing salt when the latkes come out of the oil will go a long way toward making sure that every single bite is tasty. Add salt as you drain them on a paper-towel-lined plate or a rack to get rid of a little excess oil. 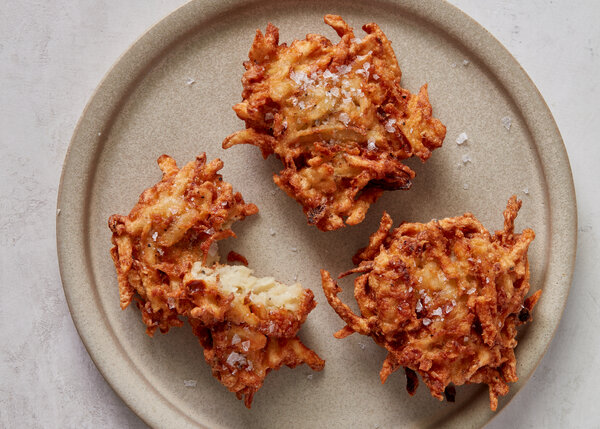 Are you looking for some fun holiday gift ideas? I love Melissa Clark’s recipes for homemade food gifts, which include a big batch of pre-mixed manhattans as well as a luxurious hot chocolate blend made with cocoa powder, bittersweet chocolate and milk chocolate.

And if you don’t have time to cook something, take a look at the New York Times Cooking and Food team’s favorite cookbooks of the year. My colleague Priya Krishna loved “Plant-Based India” by Dr. Sheil Shukla, praising its “minimal effort, high reward” recipes. And Kasia Pilat picked “The Vegan Chinese Kitchen” by Hannah Che, which has two whole chapters dedicated to tofu’s many forms. This way for the full list.

Finally, here’s a fun look back at our year in recipes. Thanks so much for reading The Veggie, and see you next week!

Get in touch
Email me at thevegg[email protected]. Reach out to my colleagues at [email protected] if you have questions about your account. Newsletters will be archived here.