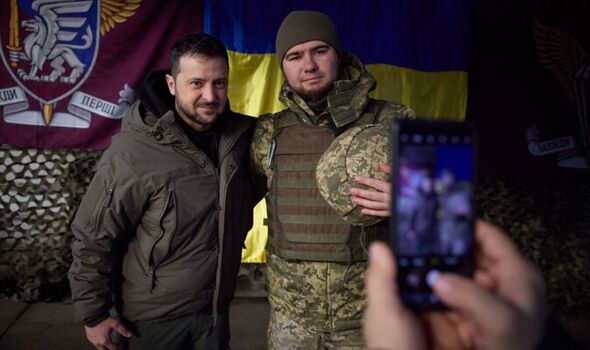 Yesterday’s attacks came as President Volodymyr Zelensky praised troops in a visit to the city of Sloviansk, near the front line.

In a video address to mark Ukraine’s armed forces day, he said: “Everyone sees your strength and your skill. I’m grateful to your parents. They raised real heroes.”

Meanwhile, photos emerged of a large fire blamed on a drone attack at a Russian airfield near Kursk.

The strikes were carried out a day after Moscow blamed Kyiv for unprecedented attacks on two air bases 300 miles inside Russia.

Engels base in the Saratov region has Tu-95 and Tu-160 nuclear-capable strategic bombers used in raids on Ukraine. Dyagilevo, in the Ryazan region, houses tanker aircraft for mid-air refuelling.

The attacks threaten a major escalation of the nine-month war, although Ukraine did not confirm that it carried out the attacks.

The UK’s Ministry of Defence said Russia was likely to consider the base attacks “some of the most strategically significant failures of force protection since its invasion of Ukraine”.

It said the bombers would likely be dispersed to other airfields.

He said there was now no prospect of peace talks.